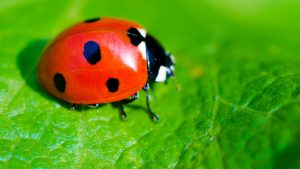 Ladybugs are commonly referred to with many different names depending on what part of the world you are in. Ladybirds, ladybird beetles, lady beetles, and Halloween lady beetles are all used.

Ladybugs have a critical role as beneficial predators of soft-bodied arthropods. They also have traditional values in some cultures. For example, the presence of ladybugs in a house is often considered a symbol of good luck.

In this article, we will cover the multicolored Asian lady beetles (MCALB). These are seasonal structural pests. Other species of lady beetles are beyond the scope of our discussion. This is the aggressive species that will cause problems in the home. Other species are much less harmful.

The History of Ladybugs in America

In 1916, the Ladybugs were first introduced to North America from Asia to manage other pests like aphids. A classic case of bringing in one pest to manage another. Various releases of this species spread out in different parts of the US.

In the fall of 1988, many adults of this species started entering homes in Louisiana. Several years later, Ladybugs were well established throughout the country.

Before the outbreak of the Asian Ladybug population, we used to tell people to pick up the little guys and let them outside. Today, they’ve become a quite big fall invader. The Multicolored Asian lady beetle is the most invasive lady beetle on Earth.

In North America, they have been found feeding on 36 different species of aphids and other pests. these insects have reduced the number of native lady beetles in North America.

Contrary to popular belief, these beetles can and do bite humans. They cause allergic reactions from sneezing to asthma depending on the person.

They also attract ants, especially carpenter ants. Unlike mosquitoes, the bite is similar to a pinch and no blood meal is taken from the person bitten.

There are about 5,000 species of lady beetles worldwide and over 400 species in North America. In Asia, the adults of MCALBs seek cracks and crevices in cliff faces to hibernate.

In the USA, cliff faces are not common, so they have elected to hibernate in and around buildings instead.  the population of MCALB consists of 50% males and 50% females naturally. Inside houses, it has 66% of MCALB are females and 34% are males.

How to Identify Multicolored Asian Lady Beetles Vs Other Ladybugs

Both adults and larvae are predators. They feed on aphids and soft-bodied arthropods. Adult MCALBs consume about 90-270 aphids per day. Larvae consume 600-1200 aphids during their development.  Females lay eggs in clusters of 20-30 eggs on the underside of leaves usually near aphid colonies.

Eggs hatch in 3-5 days. Larvae develop through four instars before they pupate within 11 days. Pupae stage usually last 5 days. The life cycle from egg to adult requires about two to four weeks. Between late September and late October, adults fly to over wintering sites.   Healthy MCALBs can live up to 3 years depending on the temperature and food availability.

In the USA, there are two generations of multicolored Asian lady beetles per year.

How and Why Ladybugs Enter Homes

Some researchers have indicated that MCALBs orient themselves towards tall buildings or hills. They may encounter your building along the way. Other studies have mentioned that they are attracted to high contrast areas. Shadows or dark shutters are areas of high contrast. These areas resemble the white cliff faces of their native habitats in Asia. Some studies have suggested that they seek out light-colored houses for this same reason.

Scientists from universities all over America continue to study Ladybugs. More is becoming known day by day.

At winter feeding sites, they congregate on the sunlit parts of the building. Once wintering ends, they finally conceal themselves in protected places.

These insects will seek out sheltered areas to over winter, such as:

In heated or warmer areas of a structure, MCALBs may hide:

On warm sunny days during the winter where pests have chosen to hibernate, you can see live activity. Any insects noted indoors during the winter are not coming in from the outside. They are coming from the structure.  Temperature is an essential factor for regulating the MCALBs activity. They need 50°F to fly and 65°F to swarm.

When do I need to get in touch with a professional?

You can get in touch anytime. We are happy to help provide more information or extermination services as needed. Please get in touch if you feel your little visitors are becoming a problem!