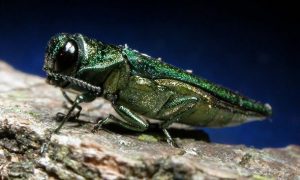 An exotic wood-boring pest threatening ash trees in North America. To date, EAB kills more than 40 million ash trees in Michigan, Ohio, Illinois, Indiana and other states. Unfortunately, EAB can be easily spread. Adult beetles can travel to new areas. Human assistance through the movement of infested firewood or ash logs. On May 13, 2009, EAB was confirmed in Minnesota (St. Paul).

These beetles can wipe out entire groves of trees. It is our responsibility to stop the aggressive movement of this invasive pest. They are spreading towards our parks, nurseries, forests, streets, and backyards. These areas are all at risk.

Adult EAB is about 3/8 to 5/8 inch long. They have a flattened back with metallic green wing covers, and coppery red or purple abdominal segments. Adult beetles leave distinctive D-shaped exit holes in the outer bark of trees.
Larvae are creamy white, legless with flattened, bell-shaped body segments. The terminal segment bears a pair of small appendages. Larvae bore through the bark making S-shaped feeding marks. Larvae become wider as they grow. Due to larvae feeding, canopy death begins in top one-third of the canopy. Destruction progresses until the tree is bare.

Other signs of possible EAB infestation include:

From mid-May to mid-August, adults are active. They feed on ash foliage and leave small, irregularly shaped patches along leaf margins. Adult feeding causes little damage to the tree. Generally, adults live a total of three to six weeks. During this period, males and females feed for a few days before mating.
The feeding continues for an extra 1 to 2 weeks before females begin laying eggs. Females can mate many times during its lifespan and lay 30-60 eggs. Eggs are deposited on the surface of the bark, in bark crevices or under outer bark or branches. After depositing, eggs soon darken to a reddish brown and hatch in 7 to 10 days.

After hatching, the first instar larvae tunnel into the tree and feed on phloem for several weeks. They create S-shaped galleries packed with fine sawdust-like frass (larvae debris). As a larva grows, its gallery becomes wider. Feeding is usually completed in autumn and pre-pupae overwinter in cells found about a half-inch into the sapwood or outer bark. Pupation usually takes place when it begins to warm up in the spring in April or May.
It takes two to three weeks for EAB pupae to become adults. Adults often remain in the pupal chamber or bark for one to two weeks before emergence.

From May to early July adults chew distinctive D-shaped exit holes in the bark and emerge from the ash trees. In northern states, a two-year life cycle can occur in infested ash trees that are healthy. In Stressed trees, the life cycle takes only a single year to complete.
EAB adults do not tunnel inside a tree after emergence from a tree trunk. They fly within a ½ mile from their emergence tree to feed on ash trees leaves and lay eggs. They can fly up to 10 miles, especially when ash trees are not available within their normal flying zone. EAB larvae are the damaging stage. They live inside a tree and eat through the active phloem and xylem of the ash tree. This causes general yellowing and thinning of the foliage followed by canopy dieback and the eventual death of the tree in one to three years.

If you need more information on emerald ash borers (EAB) get in touch with us today.

TKR Property services uses Scott from Annihilator Ex-Termination in a 200 unit building in Jersey City.  Scott goes above and beyond to ensure the building is serviced well.  He is responsive and has great follow up and documentation.  This is w
Howard M
Read More
NYSDEC Business Lic. No. 13915 NJ DEP 99201A
You Got Bugs?
Not For Long!