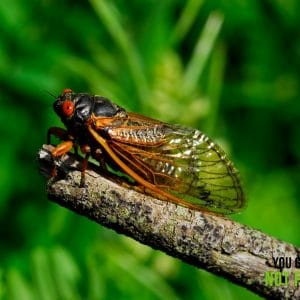 Are you prepared for another resemblance of the biblical locust plague? Well, it isn’t a plague per se, but the sound of an emergence sends cold shivers down your spine still.

Cicadas are part of the superfamily, Cicadoidea. And are non-venomous, so you have absolutely nothing to worry about except from their ear-piercing buzz.

Some species of Cicadas emerge annually, while an exclusive species to North America, Magicicada, which spends most of its lifespan thriving underground as nymphs emerge every 13 to 17 years.

Periodic Cicadas emerge annually in a large swamp numbered in billions with a loud, buzzing sound. You may have noticed this occurrence in previous years, but everyone is talking about the Brood X Cicadas.

This species of cicadas’ last emergence was in 2004, and if you have your numbers right then, it’s about time we expect another emergence. That leads to the question: Are Cicadas Coming In 2021?

Before emergence, the periodical Cicadas spend most of their time in their underground abode sucking tree saps from roots before going above ground.

When will the Cicadas emerge?

Talking to the New York Times, Matt Kasson, a West Virginia University biologist, said, “They are ready but waiting for the soil to be warm enough. The ideal soil temperature for cicadas is about 64 degrees [Fahrenheit]. For the Mid-Atlantic region, that usually comes by about the third week of May, but it could be sooner. Usually, you have stragglers on either side.”

One thing is certain; this phenomenon can never go unnoticed as they will signal their arrival with loud mating calls once on sight.

What people are saying

With reports from citizen scientists showing the emergence of the Brood X Cicadas, reports come in from people who have sighted these supernatural creatures in their yards. And the most reports coming from Tennessee, Bethesda, Ohio, Washington DC, Maryland, etc. The emergence has already begun!

If you stay close to these areas and haven’t sighted these creatures yet, then you should very soon.

Should you be worried about the emergence?

Unlike locusts which feast on our crop fields, you have absolutely nothing to worry about as these creatures are harmless to humans and crop fields. However, they may be a little destructive to slender tree branches that they utilize as a nesting ground to lay their eggs.

The cicada’s emergence will last over the next few months. In the coming months, you should expect billions of these creatures to cloud the woods and neighborhoods in most U.S states.

However, you can always find new reports on sightings and tips on handling the emergence with our 24/7 expert environmental services. You can go ahead and give us a call right away or better still, fill out our contact form.

When I saw I had termites in my home I panicked. Scott put me at ease and ultimately my problem was annihilated! Very appreciative to ensure a job well done!
Marianne S
Read More
NYSDEC Business Lic. No. 13915 NJ DEP 99201A
You Got Bugs?
Not For Long!