WHAT ARE CARPET BEETLES?

As the name implies, a carpet beetle can cause major damage to furniture, fabrics, carpets, furs, and other items of that nature. Carpet beetle larvae do not generally feed on synthetic fabrics but will feed on blends like wool synthetic blends.

Carpet beetles get into your home by latching onto you without you knowing. They can spread from there to places where fabrics or bits of fabric can gather. They can be found behind baseboards where lint gathers, in air ducts, in the stuffing of furniture and in places like the bristles of old paint brushes.

Carpet beetles can cause a lot of damage before they are ever found out. This could be 6 months to a year after they initially enter the home. By this time, the problem can be out of control by conventional and DIY methods. Get in touch with a professional exterminator in your local area. Staten Island has been a hotbed for these kinds of pest issues in recent years. Annihilator eX-Termination is well versed in the kinds of beetles that live here and how to get rid of them fast and for good.

Black carpet beetle larvae range in color from light brown to black. They are shiny, smooth, hard, and are covered with small hairs. they are carrot-shaped with a tuft of long hairs at the smaller end. 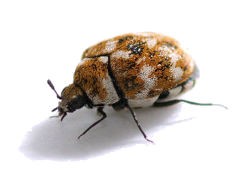 Carpet beetle exterminators have issues as well with this other species. The coloring of the shell on this species is a white and yellow pattern with specks of dark brown and black throughout at random.

Larvae that have matured are about the same size as adults. They are furry (often called the woolly bear) and have alternating light and dark stripes. You can distinguish these because they are broader at one end than other types of carpet beetle larvae.

The varied carpet beetle is the most common species found throughout the world. They are found on every continent aside from Austrailia and Antarctica.

Carpet beetles differ from bed bugs in a few ways:

HOW TO GET RID OF CARPET BEETLES

Once carpet beetles are in, they are hard to remove. Your best bet is to get in touch with exterminators in Staten Island like us.

These kinds of insects are fairly common in professional pest control. Staten Island has hundreds of insect species that terrorize humans. We can annihilate them all.

Annihilator Extermination is a very reliable, effective and professional pest control company with a high work ethic. They take the time to listen and are happy to answer questions about their services. Annihilator's pest control technicians are
Andrew Y
Read More
NYSDEC Business Lic. No. 13915 NJ DEP 99201A
You Got Bugs?
Not For Long!